Darby Harrington | Concierge
Not so long ago, Darby Harrington was working part-time in a job that was no longer fulfilling. Over time, his duties had become limited, leaving him unchallenged and bored. Darby, who was unwilling to accept a job without purpose, spoke with his employment support team and together they decided it was time to seek out a new path.

“It was time for me to move forward and get a fresh start,” said Darby. “I felt very isolated and was being asked to do less and less,” he adds.

With the completion of Gonzaga’s new Hemmingson Center, Darby knew that several new jobs would be opening up soon. Being a very social person, Darby had already made inroads with some of the administrative staff at the center as his old job was only steps away in an adjacent building.

“I met several people that worked at the center and I got along really well with them. Once they offered me the job, I needed to pass a strength test which I did really well on.”

It seems now that Darby has found the right fit. As one of many newly-hired concierges for the Hemmingson Center, Darby meets and greets students throughout his shift, holding open doors and giving out directions to visitors. Darby always makes it a point to bow as each guest passes through the doors.

“To me the Hemmingson Center is like my very own giant castle and I want everyone to feel welcome when they walk through the doors.”

As for Darby’s job satisfaction…

“I have a lot to do here. I greet students, I do mail runs, I clean around the front desk, I always have e-mails to read- and next month I’m giving a presentation at our staff meeting! I’m happy with the job and I feel like I’m finally part of a community.”

Dan Harris, Darby’s supervisor and Lead Conceirge at the Hemmingson Center, feels that Darby has been a great asset to his team and a great ambassador for the building.

“We’re always trying to challenge him more as time goes on because we know he’s capable,” said Harris. He’s risen to every challenge and I think soon he’ll be behind the main desk answering questions from the students and answering phones.”

“Having Darby here helps to break some of the student’s stereo types. They become more aware of the fact that he doesn’t have as many limitations as they may have thought he had,” adds Harris.

As for Darby’s plans for the future…

“I’m very happy here but my ultimate dream is to work on the set of a Walt Disney movie.” 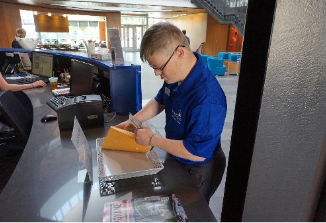 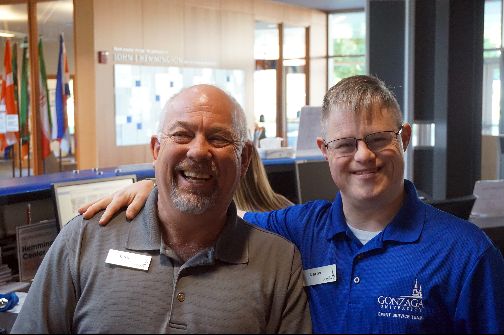 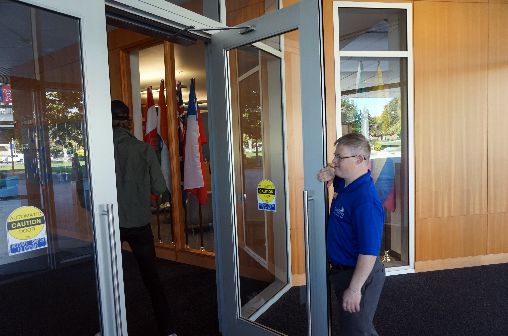